By JOHN FLESHER and TAMMY WEBBER

MONTICELLO, Minnesota (AP) — Silflower was among native plants that blanketed the vast North American prairie until settlers developed farms and cities. Nowadays confined largely to roadsides and ditches, the long-stemmed cousin of the sunflower may be poised for a comeback, thanks to solar energy.

Researchers are growing silflower at nine solar installations in the Minneapolis area, testing its potential as an oilseed crop. The deep-rooted perennial also offers forage for livestock and desperately needed habitat for bees, butterflies and hummingbirds.

“We need a lot of plots spaced pretty far apart to measure silflower’s effects on pollinators,” said crop scientist Ebony Murrell of The Land Institute, a research nonprofit. “The solar industry is interested in restoring pollinator habitat. This seemed to be a good partnership.”

Solar is a renewable energy source that can help wean the world off fossil fuels that produce greenhouse gases. But it also could benefit the environment and economy in ways not as well known. 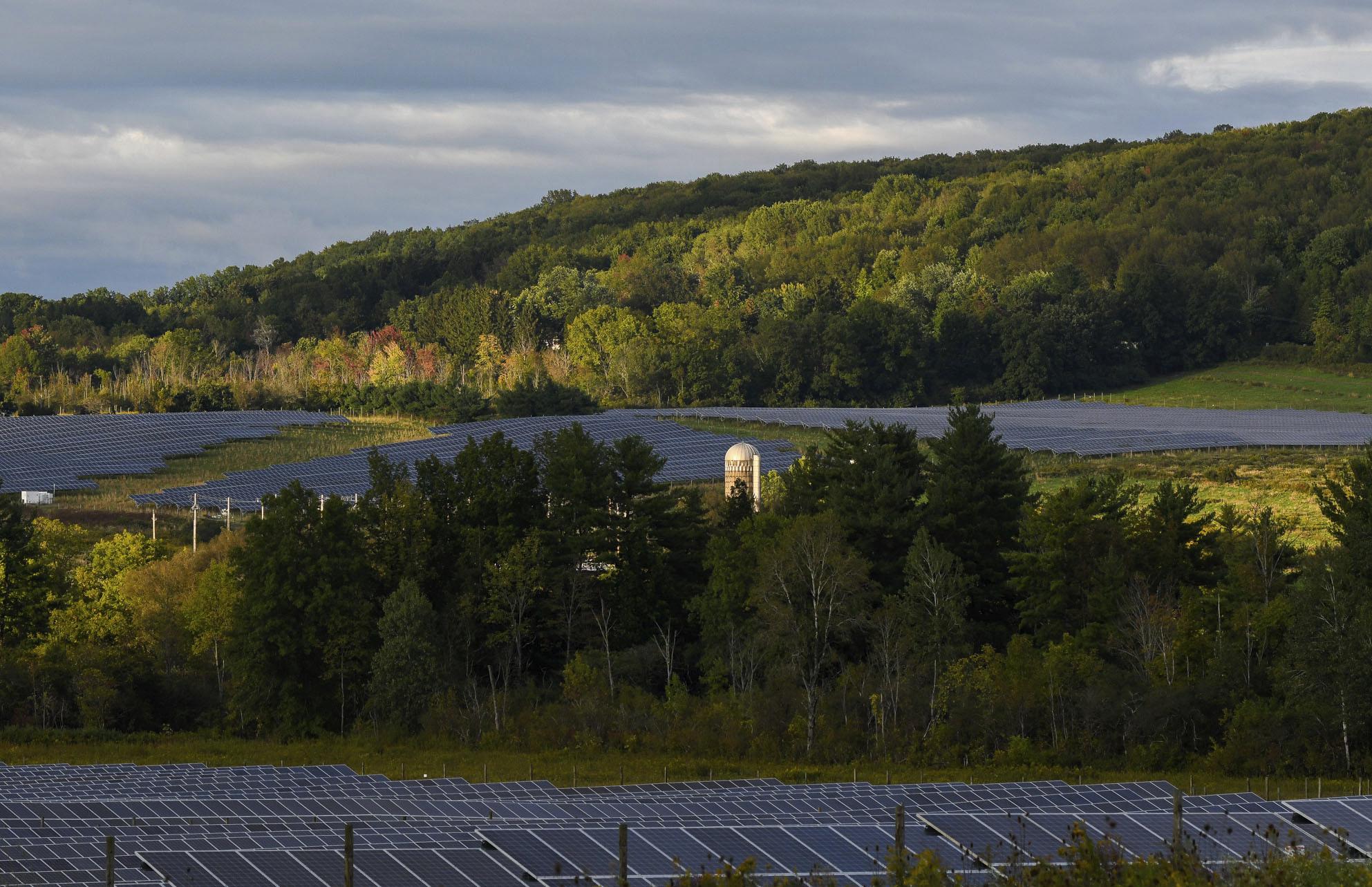 As the industry grows, solar arrays will sprawl across millions of acres (hectares) — wasting farmland, critics say. But advocates see opportunities to diversify crop production and boost landowner income, while repairing ecological damage to ground plowed under or paved over.

“There’s lots of spaces where solar could be integrated with really innovative uses of land,” said Brendan O’Neill, a University of Michigan environmental scientist who’s monitoring how planting at a new 1,752-panel facility in Cadillac, Michigan, stores carbon.

Elsewhere, solar installations host sheep that reduce need for mowing. And researchers are experimenting with crop growing beneath solar panels, while examining other potential upsides: preventing soil erosion, and conserving and cleansing water.

The U.S. Department of Energy is funding a quest for best uses of lands around solar farms. The project, called InSPIRE, involves the National Renewable Energy Laboratory, Argonne National Laboratory and other partners conducting research at 25 sites nationwide.

The U.S. has about 2,500 solar operations on the electric grid, most generating one to five megawatts, according to the Energy Information Administration. A five-megawatt facility needs around 40 acres (16 hectares). While some occupy former industrial sites, larger installations often take space once used for row crops.

Depending on how quickly the nation switches to renewable electricity, up to 10 million acres (4 million hectares) could be needed for solar by 2050 — more than the combined area of Massachusetts and New Jersey, an analysis by Argonne found.

Solar developers and researchers hope projects with multiple land uses will ease pushback from rural residents who don’t want farmland taken out of production or consider solar panels a blight. 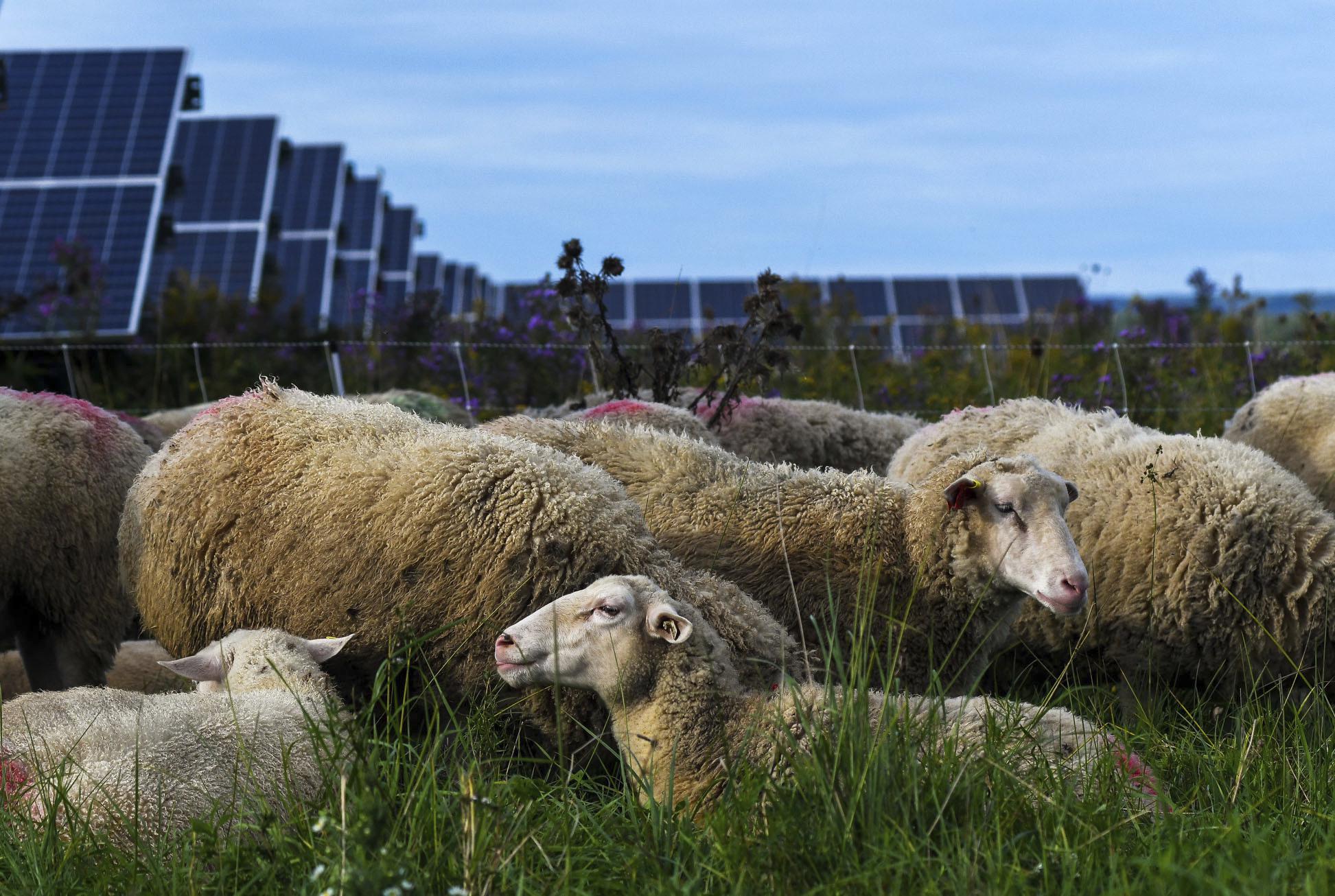 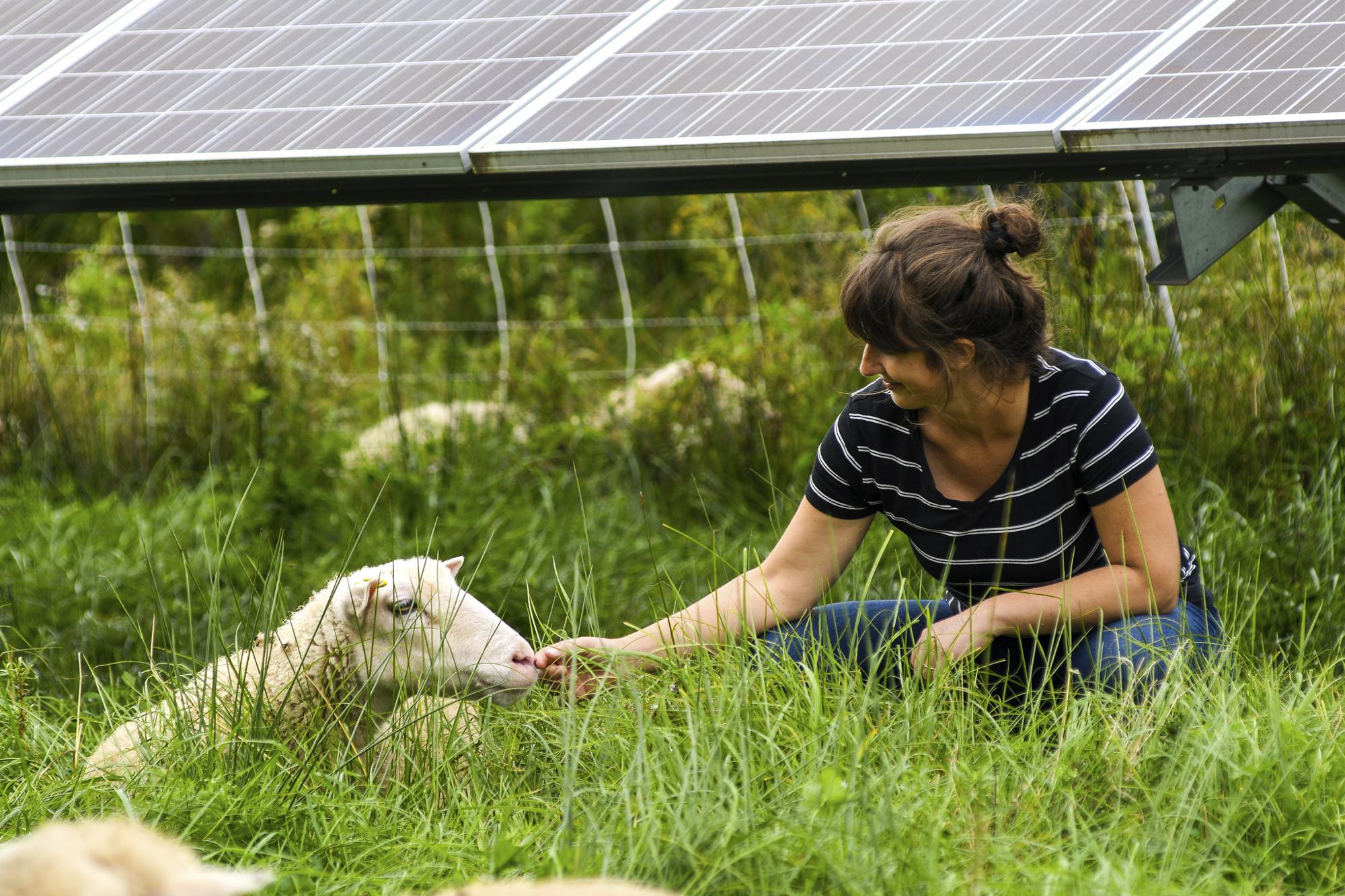 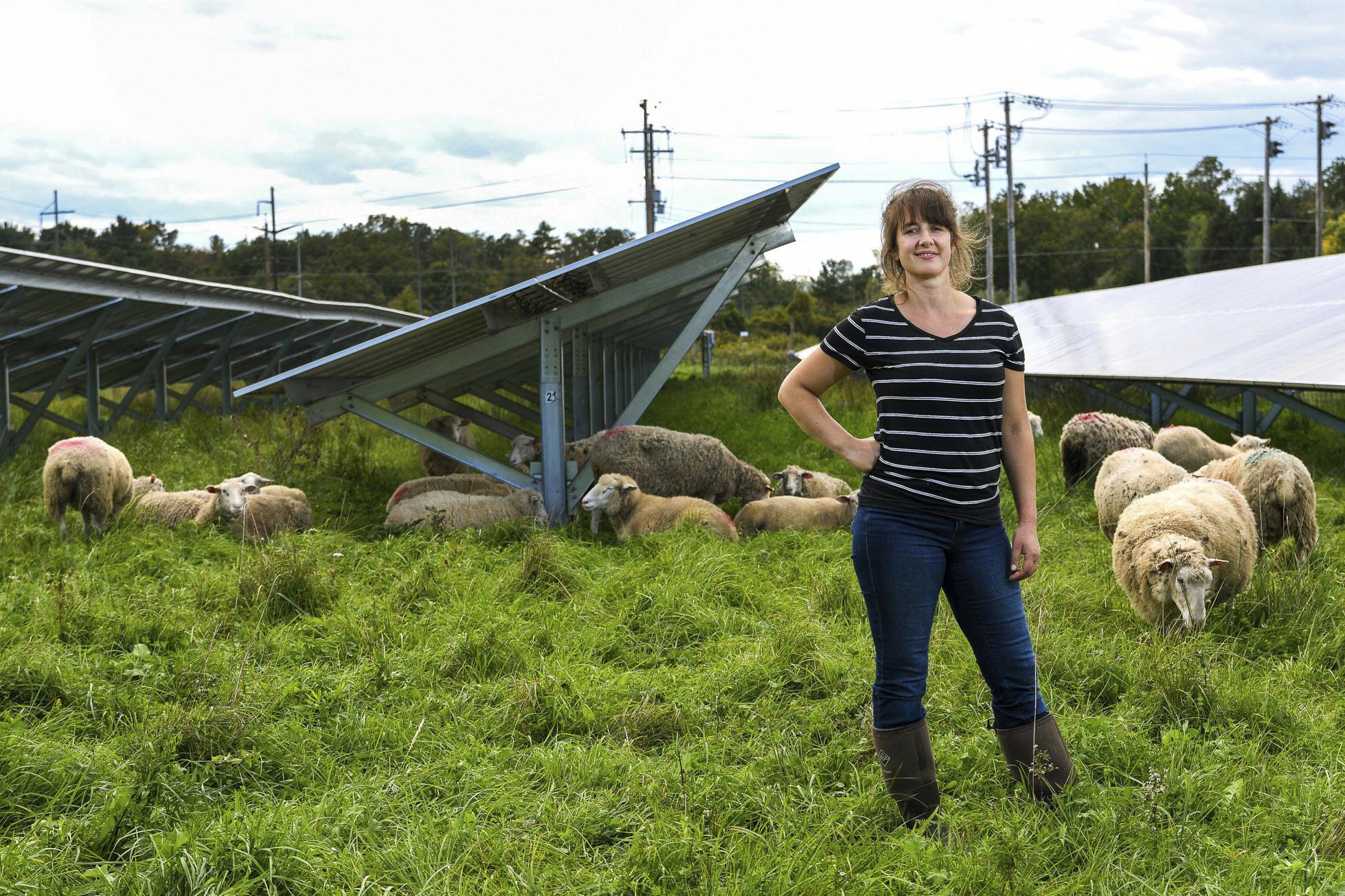 Farmers get $300 to $550 per acre yearly to graze sheep at solar sites, increasing farm income while sparing them the cost of renting or buying pasture, said Kochendoerfer, who owns about 400 sheep with her fiance, Lewis Fox. Grazing is less expensive than traditional site management, she said.

Fox has sheep at solar sites from southern Pennsylvania to Vermont.

“Certain times of the year … the sites will be like a butterfly house in a zoo — there’s just butterflies everywhere,” he said.

Sheep are feeding at solar installations in more than 20 states, said Lexie Hain, director of the American Solar Grazing Association and Fox’s business partner. It’s also happening in the United Kingdom, other parts of Europe, Uruguay and Australia.

Solar panels move with the sun at Jack’s Solar Garden in Longmont, Colo., providing both sun and shade to the vegetable garden below. (AP Video/Brittany Peterson)

In Longmont, Colorado, Jack’s Solar Farm offers another example of solar meeting agriculture. Instead of wheat and hay as before, the farm’s 24 acres (about 10 hectares) host 3,276 panels, generating enough power for about 300 homes. Beneath them grow tomatoes, squash, kale and green beans.

Researchers are comparing vegetables grown under panels six or eight feet (about two to 2½ meters) off the ground with others in open sunlight. Results were mixed during the recently concluded initial season but shaded plants appeared to have a longer growing season.

“We don’t have to leave the soils underneath our solar panels across our country denuded or just left to weeds,” owner Byron Kominek said. “Elevating the panels a little bit more provides agricultural jobs as well as an opportunity to do more with the land.”

“Agrivoltaics,” or growing produce beneath panels, is especially promising in hot, arid regions, say experts who have planted cherry tomatoes and peppers beneath them at the University of Arizona’s Biosphere 2 laboratory. 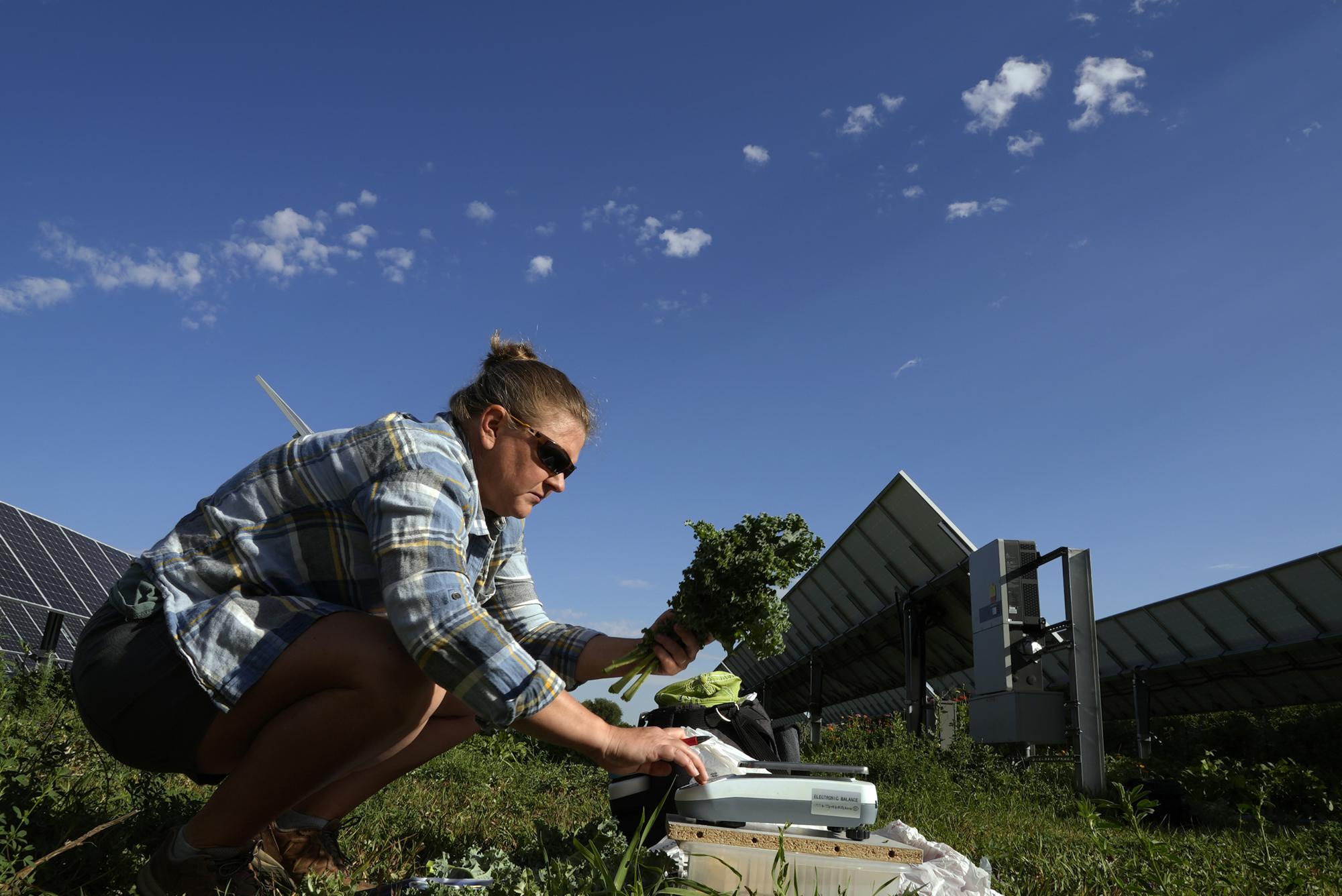 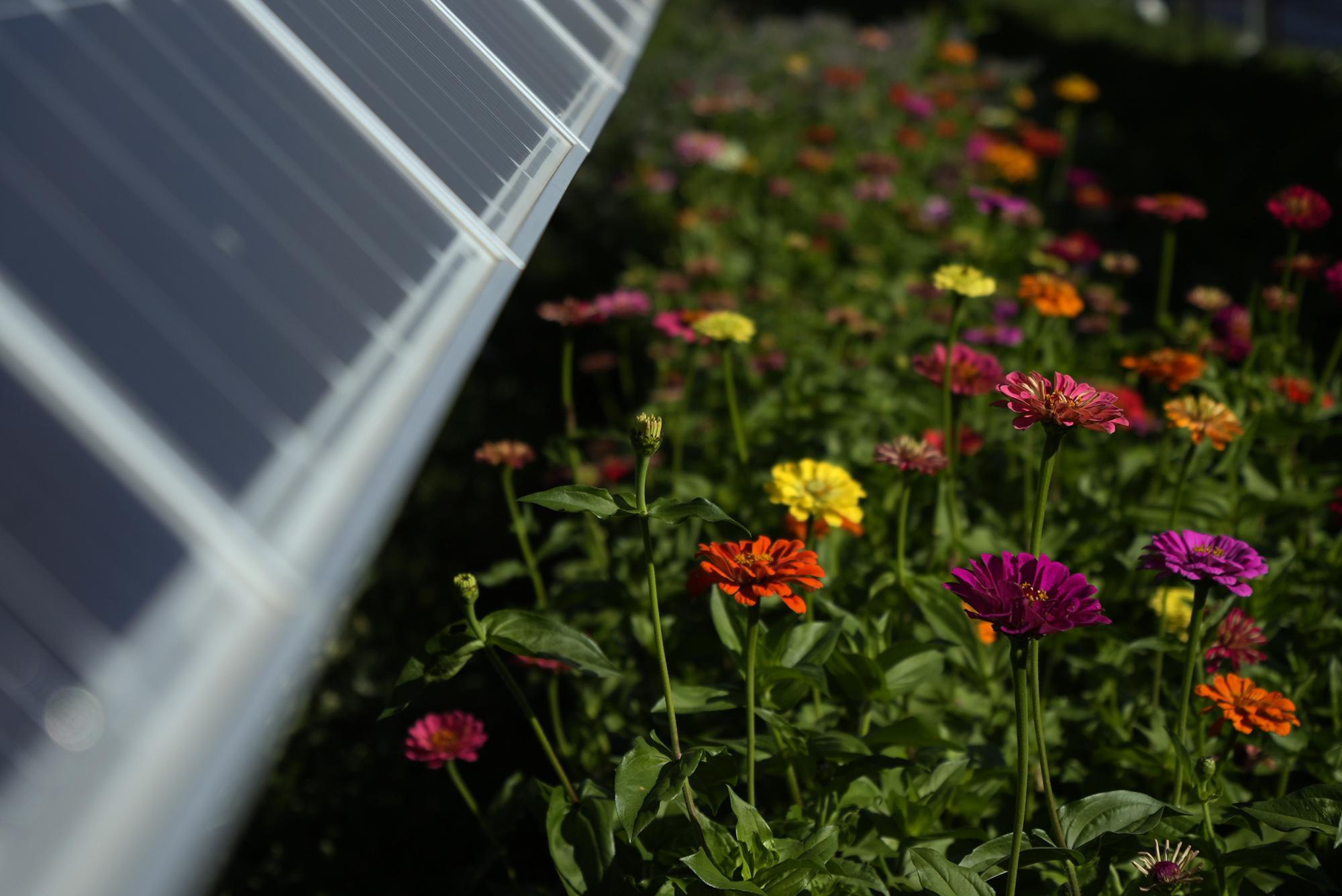 Those crops usually match or exceed ones in a traditional environment, according to the team’s findings. With less direct sunlight, they lose less water to evaporation, reducing irrigation demand. And the plants keep panels cooler, boosting performance.

How widely such farming could happen remains to be seen, said Greg Barron-Gafford, a biogeography professor at Arizona. Large-scale agriculture requires mechanized planting and harvesting that might be difficult beneath panels.

“But the vast majority of farms across the country are small farms that are breaking even or losing money,” Barron-Gafford said, adding that leasing land for solar energy while still growing food could generate profits.

While commercial prospects for agrivoltaics are unknown, scientists say it’s certain that solar grounds are ideal for native grasses and flowers that draw pollinators, many facing extinction.

A team led by Oregon State University researcher Maggie Graham reported this year that bees and other insects visit plants partly or totally shaded by panels. They also may pollinate crops in nearby fields, boosting yields.

Some solar developers are resisting because plants for pollinators are more expensive than lawn used at many sites. But over time that’s offset by lower maintenance, said Reed Richerson, chief operating officer of U.S. Solar, a Minneapolis developer. 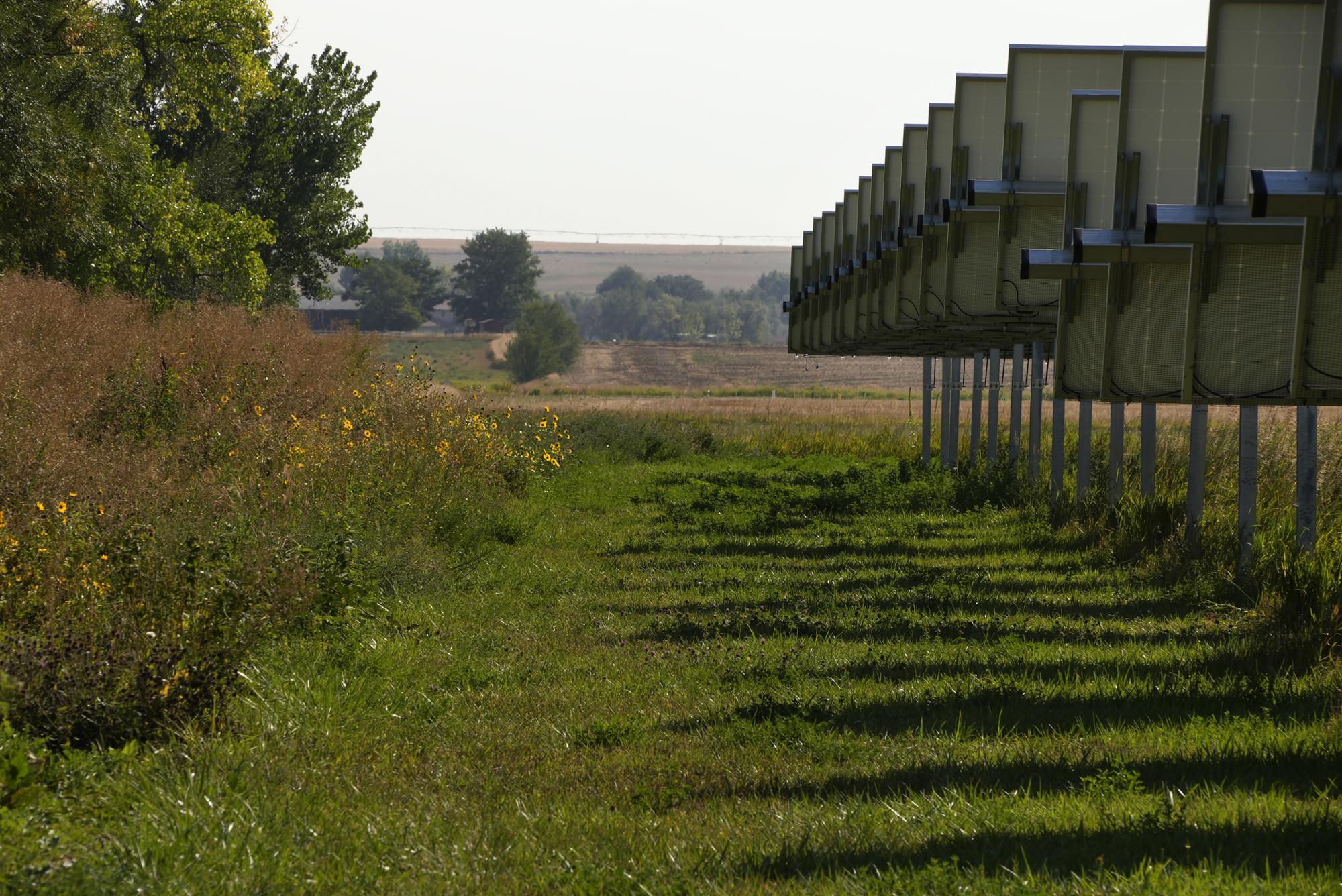 The popularity of saving bees and butterflies is attracting the likes of Walmart, which buys power from dozens of pollinator-friendly U.S. Solar installations.

More than a dozen states have standards or guidelines based on qualities such as ground cover density and diversity, and the amount of land involved.

“We wanted to avoid greenwashing — planting a little patch of clover and petunias and saying, ‘There’s my pollinator-friendly contribution,’” said Michael Noble, director of Minnesota-based Fresh Energy, which helped develop the standards.

Three years ago, he said, one of the Minneapolis co-op’s solar projects risked rejection by a suburban planning commission until supporters brought up the pollinator benefits and their visual appeal.

“The technology of solar energy is unfamiliar and foreign,” Davis said. “But everyone understands what a meadow is.” 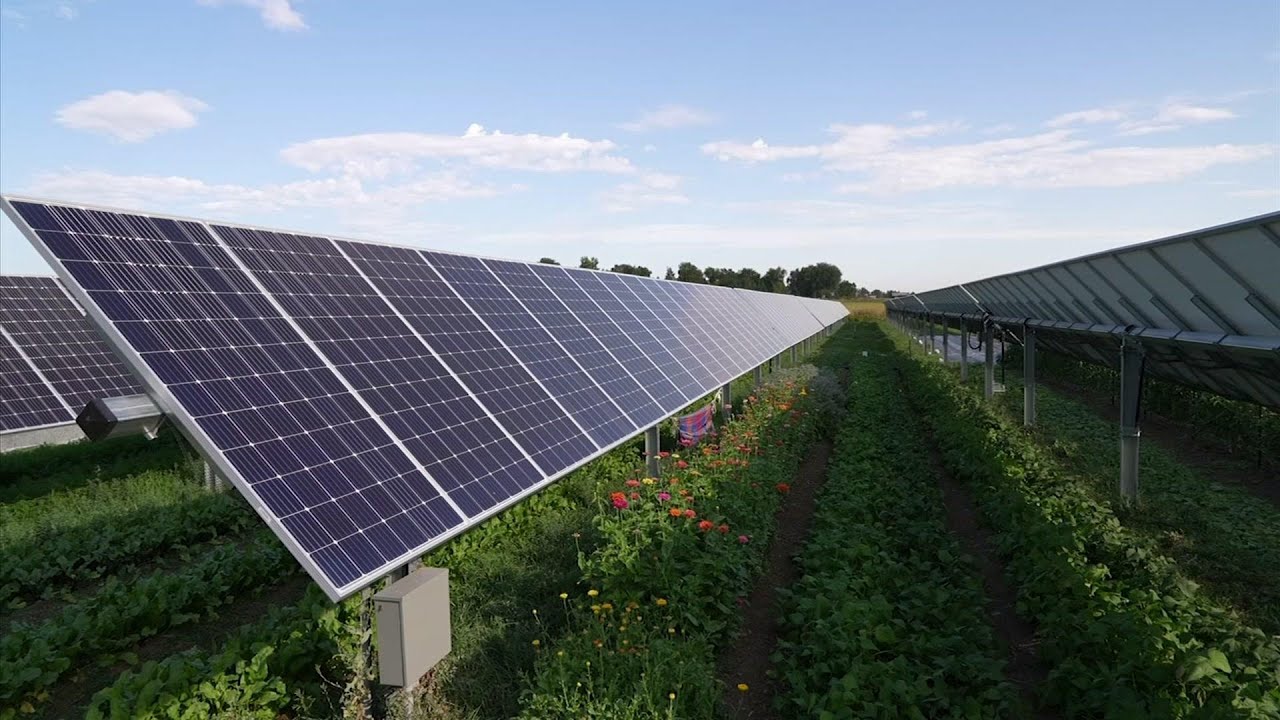 As solar energy becomes more commonplace around the world, millions of acres will be covered with sprawling collections of panels needed to generate electricity. While some worry about the loss of valuable farmland, others see an opportunity. (AP Photo/Brittany Peterson)

The Associated Press Health and Science Department receives support from the Howard Hughes Medical Institute’s Department of Science Education. The AP is solely responsible for all content.